Prague Castle (Czech: Pražský hrad) is the official residence and office of the President of the Czech Republic. Located in the Hradčany district of Prague and dating back to the ninth century, the castle has been a seat of power for kings of Bohemia, Holy Roman emperors, and presidents of Czechoslovakia. The Bohemian Crown Jewels are kept within a hidden room inside it. The Guinness Book of Records lists Prague Castle as the largest ancient castle in the world. It occupies an area of almost 70,000 m2, at about 570 meters in length and an average of about 130 meters wide.

Břevnov Monastery (Czech: Břevnovský klášter, German: Stift Breunau) is a Benedictine archabbey in the Břevnov district of Prague, Czech Republic. It was founded by Saint Adalbert, the second Bishop of Prague, in 993 AD with the support of Duke Boleslav II of Bohemia. Hence the first Benedictine male monastery in Bohemia, it also has the oldest tradition of beer brewing in the Czech Republic, up to today, the Břevnovský Benedict beer is brewed here. 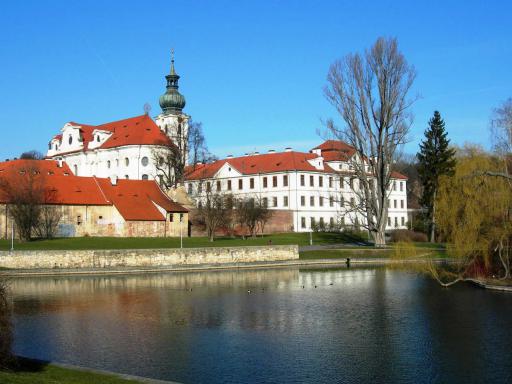